One of the markers of great art is its ability to amplify and elevate one’s already profound appreciation of and attention to something. It’s this marker that struck us when we came across Chris Ewers‘s beautiful photographs. His striking images of tattooed subjects elevated our already deep, and rather apparent considering the topic of this blog, love of tattoo art. A photography industry veteran, Ewers has recently been making his mark independently and even working on film projects. We were lucky enough to catch up with him and talk about his work and the future. 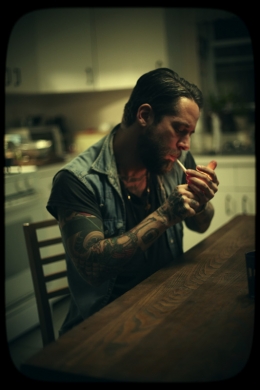 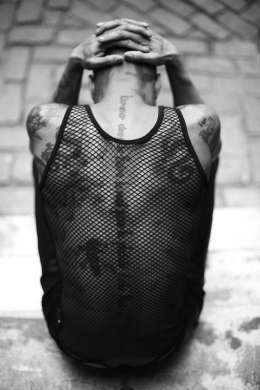 Your portraits are so intimate without feeling intrusive. What do you believe makes a great portrait?
I think there are 3 basic ingredients to a great portrait: the subject, the environment and the photographer. It may sound obvious, but I believe each to be equally important. It’s the relationships that exist between each of those elements, however, that really interests me. I come from a mixed bag of opposing schools of thought: cinematography and photojournalism. One requires total control of a contrived scenario, the other requires an ability to work only with what is available to you. Both are equally effective methods of storytelling, however I like to choose certain aspects of each discipline when I shoot. I create a controlled environment and lighting scenario, but I don’t like to formally direct my subjects; I find doing so can have a stifling effect on the shoot. I instead find it far more interesting to create a mood or to introduce a concept using whatever tools I have at my discretion, then document what happens within that scene. What you end up with is hopefully an honest representation of the relationships between those three basic elements. 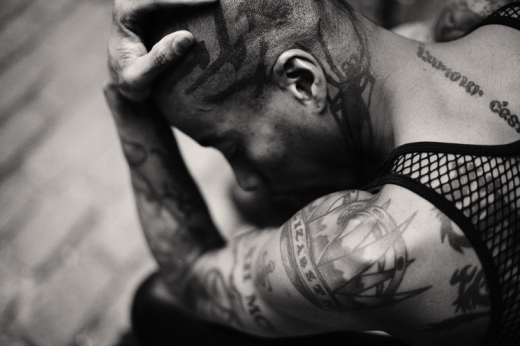 Did you specifically set out to photograph tattooed subjects or did that just happen naturally?

No, I didn’t necessarily set out to specifically photograph tattooed subjects. When it comes to what or who I photograph, I find that my interests have evolved over the course of my career. At first I set out to shoot what I thought would be commercially viable, a mistake that a lot of emerging artists tend to make. The resulting work was far too safe and stagnant. Instead, I now make every effort to be brutally honest with myself, to explore whatever it is that catches my eye or that interests me culturally, socially, or even superficially. I myself have always had a love of tattoo; there’s something I find not only romantic about it, but isolating as well. Additionally, I’m fascinated by how the practice itself has evolved since I got my first almost 15 years ago. There’s no denying that it’s an art form same as painting or sculpture and each piece has a story of its own in exactly the same way as a traditional piece of art does, each says something about its owner, and I’m interested in what those stories are.

What projects do you have coming up that we can look forward to?

For the past year and a half, my brother and I have been producing a feature length documentary about a jazz musician who died in a plane crash in early 2009. His story is not only tragic, but, more importantly, inspirational and touching. He was in the process of writing and recording his first solo album when he passed, and since a team of dedicated people have been pulling together some amazing musicians to record various parts so that his unfinished album can become a reality. It’s scheduled to be released next year, and it’s something that I’m very proud of, and I’m excited to get the chance to share this man’s incredible life and story.

You can see more of Chris’s amazing photos and keep tabs on his upcoming projects over at his blog.

Lucette is a longtime tattoo enthusiast who builds communities on the web as her 9-5. She is one of the people behind the launch of NYBA and in addition to helping here, she's currently working her ultimate plan to become an old surfing midwife.
View all posts by Lucette →