Unless you’ve been living under a rock, you have certainly heard of Paul Booth’s Last Rite’s Tattoo Theater , which has a reputation for housing some of the world’s top tier tattoo artists . Stefano Alcantara is a prime example of one of their premier artists, best known for his amazing photo realism. He has the unparalleled ability to utilize intense shading and vivid colors to make his tattoos look like actual three dimensional photographs on the skin. A true artist, with a 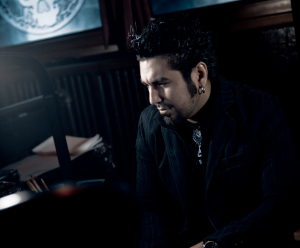 Jennifer Arroyo is best known for her impressive skills on the bass, and she certainly has made quite the name for herself in the Metal music scene. Remarkably, she began touring at just 14 years of age, playing with bands such as Open Defiance, Spine, and KItte. As the current bassist for Suicide City and Demilitia , Jennifer has now returned to her New York roots and when she isn’t rocking out on stage, she is

After developing his skills at Peru’s main art school and honing them at Paul Booth’s Last Rites Tattoo Theater , Peruvian born premier tattooist Stefano Alcantara has made and continues to make his mark on the New York ink scene as one of it’s best tattoo artists. One might even say that Stefano’s talent is comparable to the master of ink himself, Booth, who is featured in many top tattooing publications such as Pounded Ink’s 10 Top Tattoo Artists . Stefano comes from a country in

It’s easy to see a specialty emerge when flipping through some of Logan Aguilar‘s work; this dude is a goliath of the facial portrait. His vigorous attention and incredible level of detail show plainly on every one of his finished pieces. It is a testament to one’s character to be able to undergo the grueling and painstaking process of near-perfect representation. Logan doesn’t sweat the small stuff. Aguilar believes that the face relies

English-born Thomas Hooper may have studied at the London Institute of Art & Design, but he’s ours now, practicing at the famed New York Adorned tattoo studio . New York tattoo enthusiasts such as yourself are not surprised that we would feature his work on NYBodyArt . Easily one of the best tattoo artists known in New York, he’s hardly a secret. At close glance his work resembles pointilism , a technique of painting in which small, distinct dots of pure color