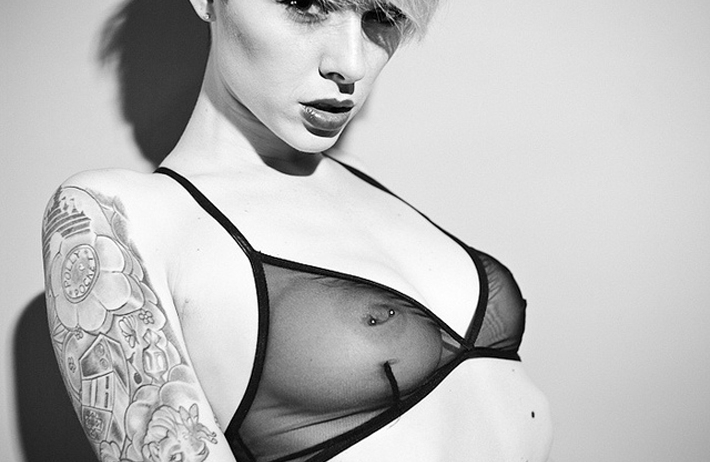 Alysha Nett on Tattoos and Modeling

When I first began speaking with model Alysha Nett, I couldn’t help but recall this quote:

I am pleased to bring you a beauty who encompasses both of these traits. At first glance, her striking features and beautiful body art will focus your eyes to the page, but speak with her and you will find a strong, confident woman with a witty sense of humor with whom you will be immediately enamored . Alysha has made a powerful mark in the modeling industry in such a short time. Her resume boasts impressive publications such as Inked Girls, Bizarre, Harlow Magazine and Nordic Tattoo Magazine. We recently caught up with Alysha and asked her to give us a glimpse into her modeling career and her passion for tattoos.

“ Never be content with just being,. Always be looking ahead.
—Alysha Nett ”

How would you describe yourself in three words?
Driven, level-headed, fun

When did you get started in modeling and how did you get into it?
I first got in to modeling in 2006 when a local photographer messaged me on myspace. I did it as a hobby on the side, mostly shooting with friends.

What former and/or current models inspire you?
I love seeing what Abby Lee Kershaw, Lindsey Wixson, Chanel Iman, and Lara Stone are doing. To be honest though, I’m more inspired by photography than the models themselves.

How old were you when you got your first tattoo and what was it?
I was 17 and it was a lower back tattoo. It’s been covered, haha.

You definitely have a number of tattoos, all very different. What goes into your decision about what to get and who does the majority of your work?
I don’t really know how to explain my decision making. When an idea comes to me, i just know. There have been times I’ve thought of something, woke up the next morning and realized I didn’t really want it, but the majority of the time I just know. Raul Tanguma in Wichita, Kansas has done the majority of my work. I’ve been on the look out for a new artist since I’ve moved out east. 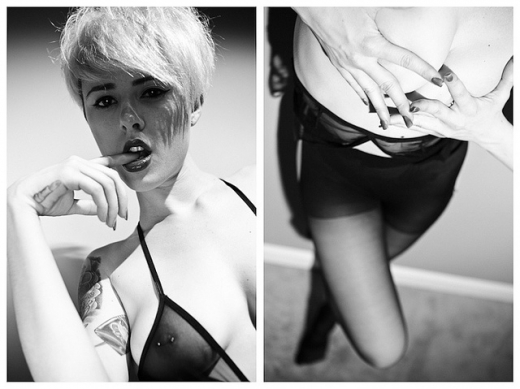 The half sleeve on your right arm is extremely fun and creative. What was the inspiration for it?
It’s just full of toys and things that remind me of my childhood. I have plans for an entire sleeve, all dedicated to being a kid of the 80s & 90s.

How about the lyrics from Brand New on your forearm? I am always intrigued by words that have a powerful meaning to an individual.
Yeah, those lyrics are particularly special to me. Brand New is my favorite band, and if I could I would probably have half of my body covered in their lyrics, haha. These ones just really stick out. I got it done when I was going through a lot of life changes. Some of them I didn’t exactly handle with as much grace as I would’ve liked. I also think the lyrics themselves are kind of a nice play on the whole “God” thing in general. Meaning, if there is a God, and he gave me grace, then where is it?

Can you pick a favorite tattoo? If so, which one and why?
It’s hard to pick a favorite, because I really do love them all. Right now I really like how my back piece is coming along.

Since your back is a work in progress, can you share what the goal is for the finished project?
Well, I wanted to cover up my lower back tattoo I got when I was 17, and I knew eventually I’d want my entire back done so I came up with the idea of the frame that way it would contain the piece and it would look finished while still being a work in progress. At the moment, all I have left is about 3 hours in order to finish coloring and shading. I’m not sure what’s going to be inside the frame, I’ll probably leave it blank until it comes to me.

You have been featured in numerous magazines and websites. Can you talk about some features that mean the most to you?
I was really stoked to be featured in Inked Girls. It’s a little bit more well known so I felt like my work was able to reach a bigger audience. I was also really flattered by the article that Style Noir wrote about me on their site. 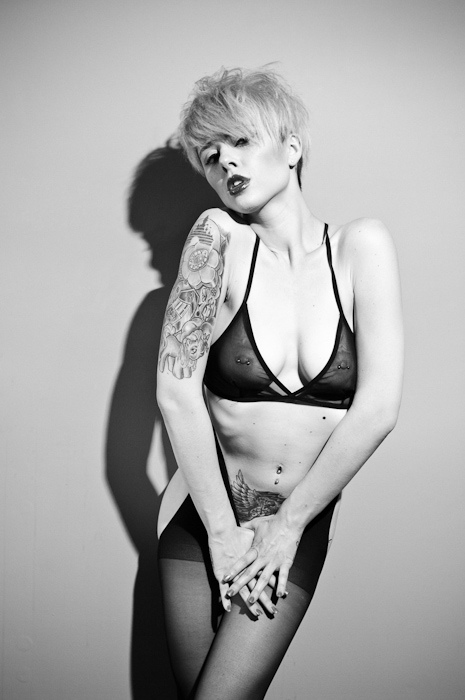 I see on your Model Mayhem page, you have been photographed in a variety of genres. How has being tattooed impacted your success in the industry and would you say the conventional definition of beauty has changed in recent years?
I would say being tattooed has helped me but also hindered my success in the industry. I’m not exactly tall, so I figured I never had a shot in the industry anyway. Being tattooed is just a part of who I am and when people hire me, they’re aware of them. I absolutely think the conventional definition of beauty has changed. Tattoos are part of the norm and I think it’s only a matter of time before it’s more respected in high fashion modeling among women, not just men.

What advice would you give to new models trying to break into the industry?
Be nice, be on time, stay professional, network, wash your face

Any plans for upcoming tattoos?
I have a few plans, yes. 🙂 I don’t ever talk about them though. I keep that between the artist and myself. I’m not sure why, I’ve just always been like that. I like to keep it to myself until it’s done.

So, while you will have to wait and wonder about Alysha’s future ink endeavors, that doesn’t mean your Alysha fix has to end here. For more enticing photos and to read her blog you can check out her out on Tumblr or Facebook. Or, get a more in depth glimpse of Alysha by following her on twitter. Trust me, you won’t be disappointed.

4 Responses to Alysha Nett on Tattoos and Modeling