Dr. Lakra(born Jerónimo López) is a Mexican born artist who works in various media such as tattoo, wall painting and traditional canvases. The origin of his name is itself an exercise in creativity. The “Dr.” comes from his habit of carrying a medical bag at the start of his tattooing career. “Lakra” is derived from the Spanish “lacra”, which means “scar”. He was born and nurtured in artistic environment. His father, Francisco Toledo, is one of Mexico’s most highly regarded painters. Lakra has also studied amongst renowned masters such as Gabriel Orozco. Whilst his recent edgy vintage print reproductions have brought him recent acclaim, they were preceded by impressive output in other genres. He seeks to bring out our primal, and often repressed, psychological drives with work that frequently depicts violent and sexual themes. He acknowledges a mixture of influences, amongst which are imagery from his native Mexico, comics, and urban culture. Dr. Lakra has his first one-man exhibition at the Drawing Center on Wooster Street in SoHo New York from February 25th to April 23rd. 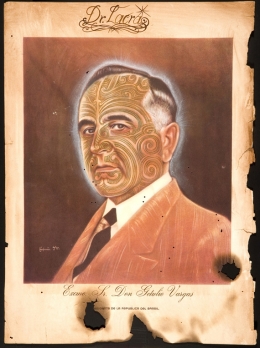 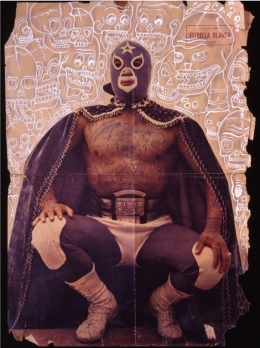 For this exhibition, Lakra will create a site-specific wall drawing throughout the gallery, integrating works on paper. In this presentation, Lakra uses drawing as the most immediate artistic impulse to invoke fundamental human urges like sex and violence. Using a range of source material, from anatomy textbooks to magazine pin-ups and comic strips, Lakra looks to Mexican and international art historical traditions, as well as the contemporary iconography of tattoo art and borrows a rich sense of satire from his early interest in cartooning. Creating a transformative visual overload, Lakra merges representation with an invented universe, as works transcend categorization and challenge social norms.