In my wealth of personal experience, a party is supposed to consist of a few hazy memories, a couple of mysterious bruises, more than a couple ill-advised text messages and, if all went well, an awkward morning. Instead, on May 19th in their Manhattan based shop, Red Rocket Tattoo threw a party that reaffirmed my love for the ink embedded demographic that I so proudly belong to. 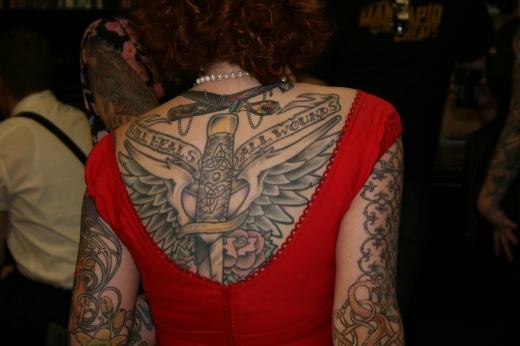 The new shop, which is located at 78 West 36th St. in Manhattan, stands blocks away from what used to be the first incarnation of Red Rocket Tattoo and opened back in July of 2011. However, having never been properly christened with a Grand Re-opening Party of its own, artists/business partners Mike Bellamy and Adam Hays decided the new and improved shop would get its party, combined with an after party for the New York Tattoo Convention which took place May 18th-20th. Sailor Jerry Rum sponsored the whole thing, and the consequent celebration resulted in the coming together of incredible tattoo artists and tattoo lovers alike. 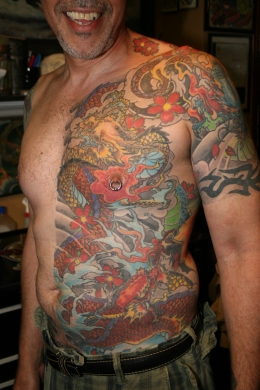 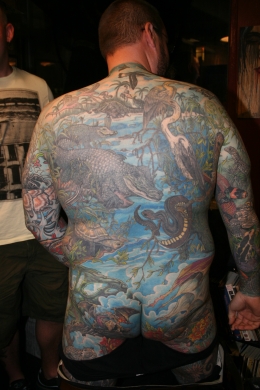 I had the opportunity to speak with Adam Hays when I arrived. As a Red Rocket Tattoo artist turned manager turned business partner, Adam gave me insight into the history of the shop. The old site stood not too far from where we were presently enjoying our drinks. Fortunately, as the business continued to flourish, growth and relocation followed. The shop now has 8 artists producing body art a collective 7 days a week, with a new location in Levittown, spreading the Red Rocket influence eastward onto Long Island. Adam spoke highly of each of his coworkers, finally emphasizing that “this shop isn’t filled with tattooers, it’s filled with tattoo artists.” One look at the portfolios around the room and I’m forced to agree. 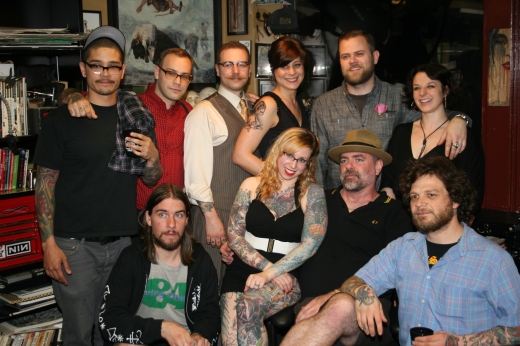 Later, I chanced upon a conversation with one of the aforementioned artists, Max Shoberg. His involvement started when he helped the staff of Red Rocket move equipment from one shop to the next. He’d been tattooing for a few years before he helped the team relocate and his portfolio landed him a job in the new location. The events that led him to be a part of the Red Rocket clan don’t belie his statements. “This place is a family,” he says. “There’s no ‘tattitudes,’ everyone’s good hearted and brings something to the table every day.” Moments later, I realize I’m sitting in his chair at his workstation and ask how he got such prime real estate. (I’m overlooking the corner of 6th and 36th from his desk chair.) He laughs, points to both sides of where I’m sitting and tells me, “I’m working between Adam and Mike, who’s a fucking legend, just trying not to fuck up. I’m so fortunate to be where I am.” I assume that he’s talking about more than just where his chair is located by this point. 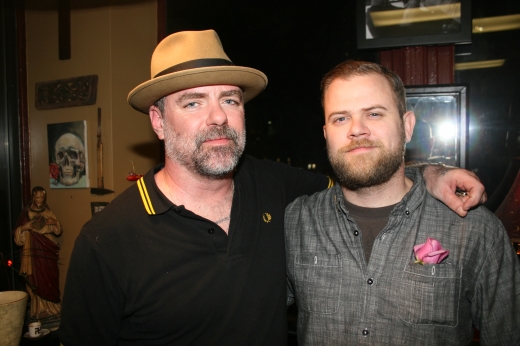 I glance around the room and realize, “I’m fortunate to be where I am right now!” The place has filled up with good looking, well dressed, tattoo flaunting party-goers and I feel hip to just be in the same room. Some women wore cocktail dresses that revealed massive back pieces. Some men wore outfits reminiscent of the roaring twenties, cuffs rolled up enough to show the wrist-end of some impressive sleeves. Attendees were showing off their more impressive pieces for all to admire. Dave and Albert, two men with the better part of their entire bodies covered in Mike Bellamy’s work, weren’t shy in showing off their tattooed (what others would consider ‘private’) areas. 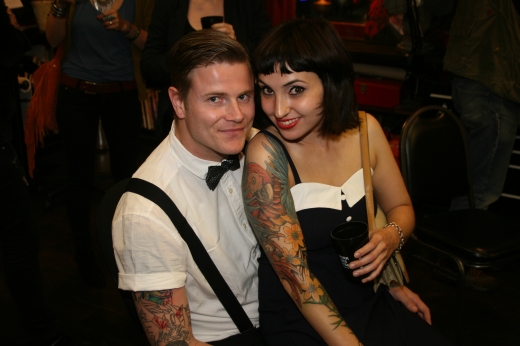 Smiles were in no short supply. Sailor Jerry liquor was flowing, music was playing and good times were had by all. The Grand Re-opening Party was, in my humble opinion, a great success. There were no inexplicable bruises this time. No outgoing texts after 2am. And the next morning was…well…turns out those stay pretty awkward.

Christian O’Neil is a recent Brooklyn resident by way of Las Vegas, NV. After spending time in the Army, playing video games professionally and training in MMA, he’s moved to NY to continue his education in creative writing.
View all posts by Christian →