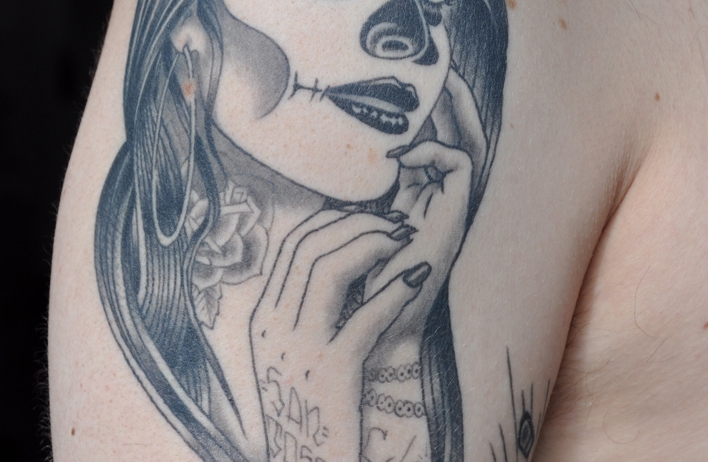 Mike Giant is to body art what Kurt Vonnegut is to counter-cultural literature: an American icon who plays by his own rules. Over the years Giant has inked every surface imaginable; from back alley walls to exclusive track bikes, sunglasses to skin and everything in between. His black line style, along with his reputation on the street, is instantly recognized yet he remains humble and connected to his roots. For Mike Giant, life is filled with simple pleasures and nothing satisfies his artistic urges more than sitting quietly with a sketchpad and a felt-tipped pen… 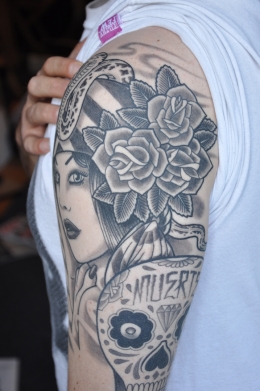 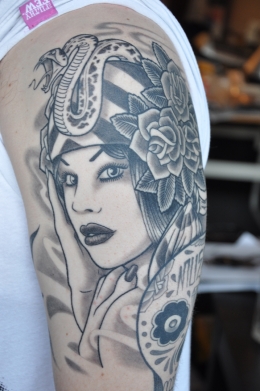 “ Fuck, everything. At base I’m thankful that my autopilot system has worked every night for almost 40 years.
—Mike Giant ”

Why don’t you start off by telling us what you have on the go right now, we can only imagine you’re deep into something or another…

Well, right now, I’m taking a break from a tattoo I’m working on. About an hour ago I started lining a koi in water on my buddy’s leg. I’m trading the tattoo work for weed; it’s my usual trade. He just went to put money in the parking meter out front. He’s back…

So you’re back to tattooing, is this strictly for a select few friends / clients because I could get a massive bag of weed…

I just tattoo friends, about once a week, rarely for cash. I trade for haircuts, skateboard equipment, bikes, artwork, you name it.

What kind of rituals do you go through before starting your workday and is every day the same routine or do you like to switch it up from time-to-time?

Every day is pretty much the same, but I do have a lot of freedom and flexibility day-to-day. I don’t really have weekends. I start the day with a hot shower, usually around 8am; my ideas for the day’s drawings come to fruition during the morning shower. Then I get dressed and walk next door to the studio. I check my email, smoke a little weed then go for a long walk, get some tea and a bagel, feel the vibe of the city. I’ll work in the studio for a few hours, drawing mostly.

I like to go for a bike ride at lunchtime and I’ll usually run errands in the middle of the day, too. I usually draw more in the afternoon, until I get hungry around 7pm. Then dinner, chilling with friends, maybe a movie or a live show. When I get home I like to read and listen to super mellow music until I get sleepy. I’m rarely awake after midnight.

Who are your favorite bands or shows to check out these days?

High On Fire stills puts on a great show, as do Mastodon. That’s about it though. I’m pretty bummed on the lack of energy at live shows these days. I still miss the energy of a Descendents show from the late 80s.

You run with a pretty eclectic crew, from the Rebel8 family to all the street art and fixie guys, this must keep you on your toes…

For sure. I like to surround myself with people who are really doing shit, I don’t like people that just talk about doing stuff. I like the people that actually follow through. It’s an energy in people that I respond to. And I must say, of all the artists out there, I think those that work illegally on the street are on the fringe of mainstream art and I like that. I think street artists are special. The same goes for fixed gear cycling; riding a bike with no brakes in traffic is pretty special, too. That’s my people! I don’t care what you’re into, if you have that spirit, I’m feeling it.

Honestly, I have it pretty easy. I don’t have to deal with clients that much anymore. I just give drawings to Joshy at REBEL8 and he keeps me on the payroll. It’s simple and honest. And [it] allows me to rest easy every night.

So where do you get all this energy from?

I just stay active: body, mind and spirit. I keep the juices flowing. When I ride my bike, I go as fast as I can. When I skate, I gotta hit the lip. When I draw, I try to refine every line as much as possible. When I meditate, I try to go deep. When I fuck, well, you know, I try hard.

I also don’t eat anything that walks, I occasionally eat fish, I avoid caffeine and high fructose corn syrup, I eat lots of raw foods, and I love cheese and yogurt. The one thing that gives me the most energy is marijuana. Straight up. When I get tired of drawing, I smoke some indica and I’m back in the game. Marijuana energizes my body.

The last thing I want to do when I’m high is sit in front of the TV or play fucking video games. I want to do something real, something physical. I know it doesn’t do that for everybody though. I’m just glad it works so well for me. 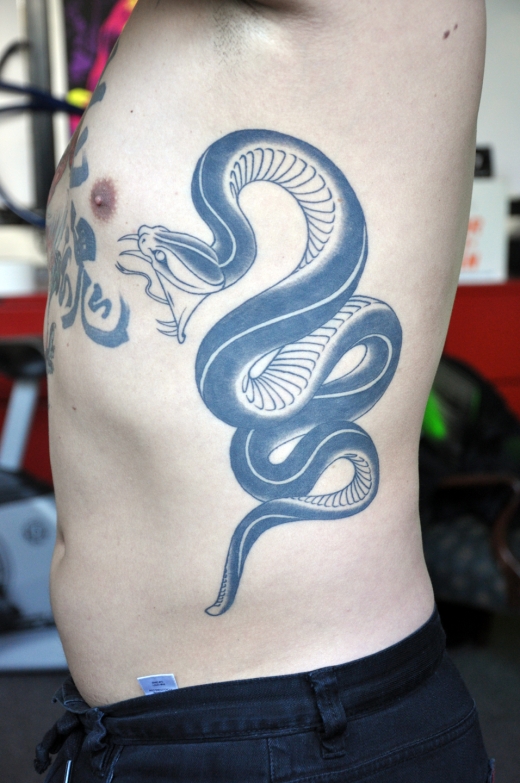 Like most artists in your world, you work with Sharpies as the predominate tool of choice. Where do you think graf and lowbrow illustration would be if it weren’t for Sharpie pens?

I think graf and lowbrow would be fine without Sharpies actually. Sharpies aren’t worth a shit for actual tagging and most comic and lowbrow artists these days use brushes and/or computers. I think drawing with Sharpies is something you do when you’re young, but pretty soon you realize its limitations and move on to a medium that allows for more depth in an illustration. I think my colorblindness got me stuck in the Sharpie rut I’m in. There are far better drawing tools out there.

So what are your preferred tools (cans / caps / brushes etc) of the trade?

I love a NY Fat Cap on a good can of black spray paint. I like to use 7
rounds and 9 mags, or 11 rounds and 13 mags tattoo setups. And I love the tattoo machines that guys like Juan Puente and Seth Cifferi are making. I love Sharpies, mechanical pencils (with HB .07 leads), white erasers, Canson drawing paper, acid-free masking tape, silver Pilot paint pens, KRINK, and Macintosh computers.

Most, if not all of your illustration is black ink on paper (or other monochromatic combinations) yet your graffiti work is typically very colorful – do you have specific ways, or a mindset, with which you approach the different artistic mediums?

Of course; I feel like my graffiti work is carrying on a tradition that was passed on to me by my mentors, it’s something bigger than just me. Whereas my illustrations are more personal, without the same kind of historical context that graffiti writing has. It’s different. And that expansive difference in mentality reveals itself visually as monochrome versus candy-coated.

A lot of your black-and-white illustrations feature some rather should we say, attractive, young women. Are these images based on real women and if so, how do you go about sourcing your models?

When drawing women I like to start by tracing the contours of a photograph, but from there it’s wide open. I’ll accent certain curves, change angles, expression, hairstyle, clothing, etc.

As much as possible I work from photographs that I’ve taken myself. I have a great library of pose reference using models I’ve met through friends, casting calls, randomly meeting people on the street, and sites like Model Mayhem.

I also get lots of referrals from girls that have already worked with me. They usually have a great time and encourage their friends to work with me. It’s cool. They love to see themselves as tattooed pin-ups. I know it’s not for every girl though.

Your artistic style, especially the lettering, is reminiscent of traditional West Coast tattoos, is there a connection between the ways you draw and the tattoo culture you’ve been exposed to?

For sure, I grew up in New Mexico and that’s part of the trail from El Paso to Los Angeles where Cholo culture has its roots. I grew up in it. The black and grey tattoos I saw on the Veteranos in Albuquerque filled me with awe. It made an obvious lasting impression.

You, much like your models, are covered in a serious tattoo collection – mostly black-and-grey if we’re not mistaken. Tell us please, who inked your last tattoo, and who is responsible for your favorite tattoo?

Most of my body is actually full color; just my sleeves are black-and-grey. Greg Rojas at Everlasting put the words “Love” and “Lust” on my lower legs recently. My favorite tattoo is a virgin with child that Chris Conn put on my right forearm. It’s awesome.

There was recently a video posted to your blog where you where filmed having your hair cut (good look btw); have those locks of hair been auctioned on eBay yet?

Those locks of hair were accounted for long before we cut them off. I had promised them to friend’s ages ago.

When all is said and done, after you’ve left the studio / shop / warehouse for the day, what are the things that you’re most thankful for?

Fuck, everything. At base I’m thankful that my autopilot system has worked every night for almost 40 years. That’s fucking amazing. Hope I wake up again tomorrow…

A perfect way to end an interview.

Nick Hanekom aka Sputnick is a writer and photographer. He has been documenting urban arts and lifestyle trends since 2004.
View all posts by Nick →