My first encounter with Marisa Kakoulas was when she interviewed me for Salon. She was pursuing a writing career, adding journalist to her legal resume, and called herself my “docupest.” Since then she has made yet another transformation, from lawyer and writer to tattoo aficionado and, combining all three vocations, runs the weblog NeedlesandSins.com. In between her transcontinental travels attending tattoo conventions and promoting her latest publishing accomplishment – the weighty three-book tattoo tomes Black & Grey Tattoo: From Street Art to Fine Art by Edition Reuss — I caught up with her to ask her a few questions for NewYorkBodyArt.

NYBA: Tell us how you made the aforementioned transitions from lawyer to writer to inked aficionado.

MK: I used to joke around saying that all these disparate aspects of my life made for one sweet schizophrenic existence—but then people started taking that statement quite literally and would back away from the crazy lady. In actuality, they are all sinuously linked. To be a good lawyer, you should be a good writer. Both often involve making your points clear while telling a story. And then of course, in anything you do, having a passion for it keeps you inspired and wanting to be even better. One of my great passions is tattoos, which has become the focus of most of my writing for magazines, blogs and now books. I also do a great deal of pro bono legal work for tattooists. So it’s all layered and symphonized rather than a lineal progression from lawyer to writer to heavily tattooed freak show.

MK: NeedlesandSins is the latest online forum for my ramblings on tattoos. I started writing essays on tattoo culture and law in 2003 for BMEzine.com. I had a column called “Legal Link,” which discussed topics from tattoo copyright to First Amendment issues.

Then in 2005, Josh Rubin of CoolHunting.com approached me to start a blog on everything that is cool about tattoos. Surprisingly, the site became popular, and a little over a year later, we sold it to a media company, and I stayed on as editor until that company folded in early 2009.

I still have this love of writing about the art, so I created NeedlesandSins.com, which has been growing rapidly since March 2009. It’s modeled after Needled, a daily account of tattoo culture featuring tattoo news, artist interviews, convention reports and photographs, event listings, book and product reviews, and much more.

NYBA: What are/have been your general inspirations?

MK: I’m inspired by fearlessness, by people who take great risks in their lives for art, politics and personal growth. As I kid, I was this little lionheart (with an orange afro) that would climb trees, talk to strangers, put on plays in the street and do everything that made my parents go gray early. As I’ve gotten older—because of failures, worries about the future, etc.—I’ve lost a lot of that audaciousness, but I’m working on getting it back. I’ve been reading books and watching films on inspiring figures; for example, I’m currently loving They Went Whistling: Women Wayfarers, Warriors, Runaways, and Renegades by Barbara Holland described as “a girl-power version of women’s history.” I finally saw the PBS documentary “Chisholm ’72: Unbought & Unbossed,” on Shirley Chisholm, the first black woman elected to Congress and to run for president. I highly recommend it. 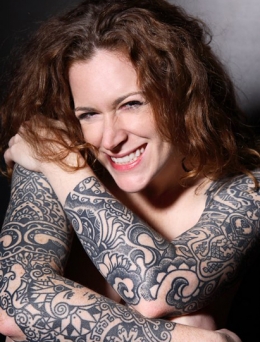 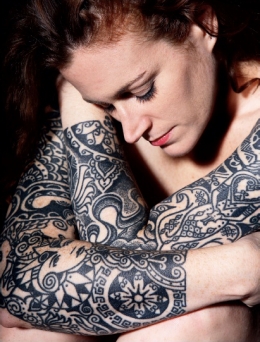 For me to list all the artists, writers and personalities who I look to for inspiration would take pages, but the most important are my loved ones. My boyfriend, Brian Grosz, is a perfect example. He runs a record label called Lapdance Academy, which he founded as a philanthropic endeavor to produce and promote musicians and songwriters. He releases their work as free high quality, MP3s. He takes a chance on new artists to put music out there that offers something beyond cute tunes with pop hooks. He’s motivated me to do more in helping to promote exciting new tattoo talent.

NYBA: Wow, I would never suspect you of losing your audaciousness! Have you lookedin a mirror lately? Of course, I think we’re both way cooler than 99% of the planet’s population! Okay, so what makes for the most compelling articles, in your opinion?

MK: Characters. Hey, why do you think I stalked you back in the day? I love telling the stories of people with fierce personalities, whether they be the local bodega owner, or the redheaded Amazon writer/artist who has thrown the sexiest parties in town. [ahem]

NYBA: Thank you, thank you! [laughs] So what articles have generated the most readers?

MK: My most popular articles aren’t so much character and art driven, but pop culture based, like someone getting a Charlie Sheen tiger head tattoo. I think these posts can be fun but I try not to over-saturate NeedlesandSins with them.

NYBA: Over the past two decades, tattoos have gone from a pseudo-illegal, taboo subculture to reality TV fodder. How do you think the industry has changed with these cultural shifts?

MK: Remember when tattooing was still illegal in NYC all the way up to 1997? My first few tattoos here were all done “underground,” which had a bit of cloak-n-dagger feel to it. Many bemoan that this excitement and mystery has been forever lost. I’ve done my share of bitching about it, but overall, I think there is more positive than negative to the popularity of tattooing. Yes, there is less badassness, but there is more artfulness. Also, less discrimination exists. Maybe one day I’ll actually be able to walk into a courtroom with short sleeves.

NYBA: Given these changes, have you found that the potential audience – for both your books and your web site, as well as tattoo culture in general – has become larger and perhaps more mainstream?

MK: Most definitely. People are educating themselves more about tattooing and are looking for the resources to do so. I get tons of messages through NeedlesandSins from people researching their first tattoo. And although tattooists and serious collectors largely purchase my books, I’ve had a number of orders from art and design fans who don’t have any tattoos but appreciate the medium.

NYBA: You travel a lot to attend tattoo conventions. Which ones have you especially enjoyed?

MK: I love conventions in general because I’ve made so many friends at these shows and it’s always a worldwide family reunion.

My hometown show, the NY Tattoo Convention at the Roseland ballroom, has been my favorite for over a decade. They consistently have a stellar line-up of artists and the atmosphere is a party.

NYBA: What other countries have been the most fun?

MK: The last show I went to that was more of a love fest than a convention was in Cobh, Ireland: The Traditional Tattoo & World Culture Festival. Artists were tattooing in tents, many by hand; there was drinking and singing around an old punk with an accordion; and I got to watch an eight-year-old hand poke a tattoo on a woman’s butt. It was the kind of event that made me think, “Thank gawd, I’m a part of this world.” [You can read more about it here.]

NYBA: You’ve had quite a bit of success in the tattoo book-publishing world. To what do you credit that success?

MK: The success of the books lies with the tattoo artists. While I do my best with the text to offer some history and context of the work presented, people buy them to look at, and be inspired by, the photos of beautiful tattoos.

NYBA: Tell us a little bit about your books.

MK: My first book was Black Tattoo Art: Modern Expressions of the Tribal [2009]. After reading my writing on Needled.com, German publishers Edition Reuss approached me and asked if I wanted to do a tattoo book with them—they also said I could chose any topic I wanted. My response: Hell yeah! I chose blackwork, not just because I’m covered in it, but also because so little had been written on the genre. I contacted artists around the world who specialize in neo-tribal/blackwork, dotwork, traditional tribal tattoos, and the avant-garde deconstructed tattoos (which I labeled Art Brut). After a year working on it, the result was a beautifully produced eight-pound, 500-page monster of black tattoos.

Then in November 2010, we released what is probably the biggest (and heaviest) tattoo book ever made: Black & Grey Tattoo: From Street Art to Fine Art, which I co-authored with Edgar Hoill. It’s a three-volume box set totaling 1,008 pages and weighing 22.6 pounds. (Thankfully, it comes in a carry case.) The volumes are divided into loose sub-genres of black & grey tattooing: Traditional Black & Grey (that is, street art inspired), Dark Horror, and Photorealism. This book also took a little over a year to curate and debuted at the 2010 London Tattoo Convention. We sold out of them, which we never expected considering its $400 price tag, but many consider it a collectors’ item. [Marisa still has author copies of “Black & Grey Tattoo” that she’s selling at the reduced rate of $350 for those in the US. People can hit Marisa up at NeedlesandSins.com.]

My next book for Edition Reuss, to be released in June, is Color Tattoo Art: Cartoon. Comics. Pin-Up. Manga. New School. Pretty self-evident from the title. Lots of trippy work in it.

Then, I have a book coming out in October for Abrams Books. It’s called Tattoo World and highlights the work of some of the best tattooists around the globe.

Finally, my book in progress is Tattoo Law on the laws affecting the tattoo community in the US. It’s been taking me a while to tackle because, every time I finish a chapter, the laws then change! With the popularity of tattooing increasing, so has the regulation of the art. I’ll probably self-publish because I want that book to be low cost, accessible, and really help artists and collectors. As it melds my legal and writing backgrounds with my love of tattoos, I guess it embodies a lot of who I am.

NYBA: Thanks for your time, Marisa! We’ll look forward to all of those new books and see you on NeedlesandSins.com!

EditrixAbby is a writer, blogger, event producer and tattoo enthusiast. She is currently working on a book about the intersection of logo tattoos, commercial graphic design and advertising called CORP.oreal Ink — Logo Tattoos: The Ultimate Advertising. If you have a logo tattoo, contact her through her evolving related blog.

EditrixAbby is a charismatic character whose vast array of life experiences have made her both intriguing and approachable. As a producer of avant garde events, Abby is quite the arbiter of underground nightlife. After decades of creative costuming, she also has a keen eye for style, and that means fashion you won't find in department stores. Her eclectic coterie has led her to create a unique dating service. And she has been writing -- about all sorts of things -- long enough to artfully string sentences together. Body art is only one of her many interests.
View all posts by EditrixAbby →