A Rare Interview Over Thousands of Miles

This issue of VAR Magazine‘s double cover features Alysha Nett, shot by famed fashion photographer Miko Lim, and a portrait of Sharon TK and Johnnie Valdes, snapped by the acclaimed Steve Prue. On the heels of the birth of his second child, Miko Lim agreed to speak with us from across many miles. He has been living in Tokyo for the past few months, and working tirelessly both in his art, and at home, so he warned me that he might not “be firing on all cylinders”. But if exhaustion had begun to creep in and make its stay with Miko Lim, certainly no one who talks with him could be the wiser, he is so centered. If Miko’s energy levels had been dipping as a result of balancing his ever-busy career with a newborn baby boy at home, then that was a secret Miko Lim was guarding very closely. He comes across as such an affable, in control and articulate gentle soul that it feels more like you’re talking to a zen master than a young fashion photographer known for his use of the hipster aesthetic form of portraiture, the snap – shot. Instead of coming across as trendy and of-the-day as he certainly is, Miko Lim possesses a sort of eternal calm and understanding that comes with insight and learning from experience. But growing older comes with new challenges to which Miko is constantly assimilating himself, and he’s not done yet.

We talked with Miko Lim about his proclivity for close-range snap-shots, as they appear in much of his recent work, and later discussed why his wife is his favorite subject to photograph. Distance, very small to expansive, seems to be a theme. It could be because Miko Lim was born in Malaysia, raised in San Francisco, and currently resides in Tokyo. What we discovered was that perhaps Miko’s center of calmness radiates from the close proximity with which he approaches his art, and the beauty he sees in it’s evolution.

“ I wanted it to always feel like it was a collaboration, like they were in on it. I just think it’s more fun that way —Miko Lim ”

Congratulations on the birth of your second child. How have you been balancing your work with family life?
Not too badly. Photography is one of those crafts that, like writing, you can pick up one day, and do a family thing the next day and work the day after that. It’s not like a 9-5.

Is the authority to write your own schedule something that drew you to photography?
Not particularly, no. I don’t think you can be successful if that was your primary goal with it. But yea, it’s a great lifestyle for sure, can’t knock that. 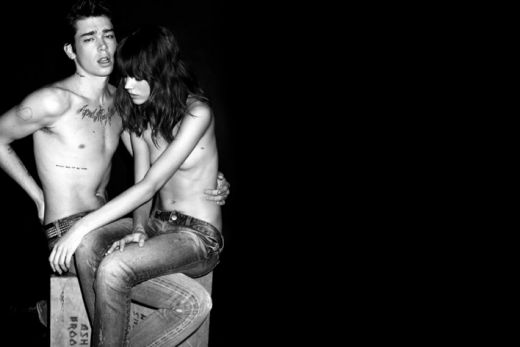 What did get you into photography?
I was a pre med student and just got kind of jaded by it, by the people in involved in it. And I was in school in LA and had a friend working in film [and he] got me into that, [where] I was shooting still photos on a movie set and I sold those to the actors and actresses that I was taking pictures of, and one thing led to another and that kind of got [my career] along that path.

How many years ago was that?
A decade ago.

So did you then begin studying photography?
No. I never did. I went to Pamona, which is a liberal arts school, and studied media and cinematography, but never photography specifically.

What did you parents think?
My mom. I grew up with my mom. She was happy about it. She was actually disappointed when I wanted to be a doctor.

Do you think you experienced something very different from other people with your similar Asian American background?
My mom is white, and I’m half-white, so when you don’t have any other Asian influences in your life you just kind of grow up. . .white. I mean, I didn’t know how to use chopsticks til I was like 25. I don’t speak any other language. I’m pretty white as they come, I guess. I just don’t have that experience.

How was it like when you first started out?
You loose money for a while. It’s not a very good financial decision in the short run.

So what are you doing now Miko? What projects have you just completed?
We just shot the latest Adidas campaign for China. We just shot a bunch of Bjorn Borg underwear stuff. We’re doing our usual work for Numero and things like that. I’m actually putting together a book right now [since] we’re leaving Tokyo in a month, with all the Japanese celebrities that I shot during my three years here.

Where are you headed after Tokyo?
We’re back in New York.

Hey, how did you guys fare with the earthquake a couple of months back?
It was pretty fucking freaky. It feels like the whole world is a waterbed, for a while. At first it’s just shaking, and a lot of I guess what Michael Bay would make like an earthquake movie. But the freakier part is that for another thirty, forty minutes it feels like the world is a waterbed. You can’t stand, you feel half drunk; it’s really bizarre. Then the next day we went to Hawaii for a couple of months.

What do you do in your spare time? You’re a photographer with a family – Is there anything you hold close to your heart, or just do for fun?
That’s a funny question right now because I feel like I haven’t done anything in so long. It’s so boring just to say that sleep is so awesome right now. It’s easy to say I used to have time to go play basketball with friends, and go have dinners and things but to honest those things just haven’t happened in the past month. So I guess my hobby is sleep. Other than that it’s just family and work. I wish I had something more interesting to say there for you.

That’s cool. Has the theme of sleep started to influence your work, then? Some artists are interested in the ambient aesthetic, or the science of sleep. Surrealism relies heavy on dreams.
No, I can’t say it has.

Speaking of categorizing your work: What drew you to the snap shot aesthetic?
Like I said, I started on a film set. I guess you can call that documentary style, it’s just kind of running around, pointing and shooting. I always liked the fact that you can point and shoot. You have to be close enough and involved with your subject, and that’s how you [the artist] are always “in” on it, whether it’s a joke or a beauty image, you’re just always in on it. Whereas if you’re using a longer lens, and you’re more of a just traditional old-school fashion photographer, then you’re much more removed from the subject. Then there becomes a kind of a distance that I wasn’t really interested in. I didn’t want it [my work] to feel like paparazzi, and I didn’t want it to feel like who I was shooting was detached from what I was doing. I wanted it to always feel like it was a collaboration, like they were in on it. I just think it’s more fun that way. You would never shoot a friend of yours, a boyfriend or girlfriend of yours from fifty-feet away with a giant lens. It’s more intimate, I guess.

Are you typically friends with your subjects before you photograph them?
Not at all. I make friends quite a bit with people I shoot, and make not-so-good friends with others. It’s always nice to shoot people for a second, third and forth time that you kind of become close with, and there’s a collaboration and you can get further along. But then you run into other people that want the long lens and the detached feeling and they don’t want to feel exposed in any sort of way, and they don’t want to be involved. Those people don’t particularly like what I do.

Are there ever any special tactics you employ to help somebody feel more comfortable being exposed?
I mean, there are a million things that every photographer has, whether you want to call them tricks or personality. It’s really just kind of a connection. I give a lot of credit to certain casting directors or art directors that pair up a photographer with a celebrity, or model that they have a feeling that these two personalities will gel and make good music together.

Why do your subjects, models for the snap shot, tend to be photographed without the use of props? For example, your GQ cover with Olivia Munn is framed with only her in the picture. What kind of effect do you try to achieve by only focusing in your subject?
There is that factor of not wanting to cloud the image with anything else. You want the viewer’s eyes to go straight to that person. At least for me, I’m much more interested in the subtler expressions, the subtle wink-wink to peoples’ mood, and if you add props and other things, which are honestly sometimes necessary, it just makes things a little easy, a little cheap…cheap and easy is cheesy, I guess. And you want to keep a certain sense of realism.

Who are your favorite subjects to photograph? Is there anyone that sticks out?
Probably my wife. She’s really lovely, and sweet and just very open hearted. And another really cool thing about her is that over the years there has been a transformation and maturity, going from us being single party kids. We met in college, and [looking] back then to how I knew her in our twenties to how I know her now as the mother of my two children….that’s just a really beautiful thing.

What’s the fashion world have to look forward from you in the future?
It’s an interesting question, because it’s lame to say “more of the same”. I’d say, there’s a maturity happening in my work, as well, and a lot of things I see from ten years ago I can’t even recognize as my own work. But it’s one of those weird things with photography, and I suppose like writing as well, the more tricks you learn, the more technically sound and skilled you become, and the more experienced you get, the more often you find yourself wanting to go back and recreate the spontaneity and immaturity you once had in your work. So I guess the dream is to find a balance, and to always be able to move ahead and do things with your work that are new and inspired and maybe inspire other people, but that still reflect who you were as an artist to begin with.