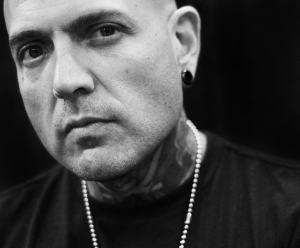 Jennifer Arroyo is best known for her impressive skills on the bass, and she certainly has made quite the name for herself in the Metal music scene. Remarkably, she began touring at just 14 years of age, playing with bands such as Open Defiance, Spine, and KItte. As the current bassist for Suicide City and Demilitia , Jennifer has now returned to her New York roots and when she isn’t rocking out on stage, she is

In today’s changing world, tattoos are less the permanent label of nonconformity they once were and have instead become another unexploited canvas in the performer’s portfolio. While many artists are choosing to “up the ante” with increasingly larger and impressive displays of unique and colorful body art, some are choosing to keep their identities off of their skin. When we asked experimental musician/performance artist Kevin Blechdom whether she already had or planned to